The #1 Way People Fail at German

How many times have you heard this: somebody traveled to Germany and came back with a story that ends with "Gee, I'm glad somebody spoke English!" ?

If I had a dollar for every time I've heard that story...

Most of the people who tell me this story have actually (tried many times) to learn German. But they didn't ever really learn anything. And they all sound the same, because they all have one thing in common. One thing that they all did wrong when they were learning German.

LEARN ALL THE GERMAN.

To paraphrase this awesome post from Hyperbole and a Half (language warning), people really do try to learn all the German. RIGHT NOW.

It is pretty epic, but neither can you a) clean all the things at once, nor can you b) learn all the German all at once. 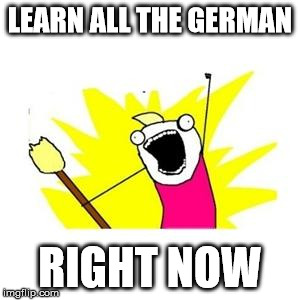 If you have this habit of wanting to do all the things at once, you will set yourself so far behind you’ll actually fall off the German train.

NAIL WHAT YOU’RE WORKING ON

So frequently people have failed because they tried to do way too much at once. People try to cram 50 vocab words before a test instead of learning an appropriate amount of words each day.

Learn only ONE case at a time so you understand it, rather than confusing yourself further by trying to learn them all at once.

Learn only the Perfekt and the past tense "war" and "hatte" if you're in the beginning stages of German. Das ist genug! That's enough!

If you're going to put in the effort to learn some German, give yourself the gift of working on only one thing at a time.